I was so excited about introducing the authors that I made an oops. I forgot these two and I hit publish instead of schedule. That is ok, I guess, as I did still manage to present it all to you.

Ok. Our amazing marketing manager did some great images to introduce you to the authors. Both of the authors today took the image and adjusted it. This first fellow had some humor and extended the edit.

Charles Kelley has quite a list of published work. He has been such a delight to have working with us on this project. Especially when his humor shows through. 😉

We are pleased to announce the Authors involved in the Nightmare Whispers Anthologies. There are a couple of Artists who due to circumstance was given a delayed deadline till the 7th. So this list may fluctuate slightly (Two possible more people) Otherwise this is the lists. Look forward between now and their release on Halloween for more details! And Due to the sheer amount of Quality submissions we recieved we decided to do one more..Yeah I know that is why we did two volumes…But even with rejection letters sent we were still getting more in. So Fae Corps is announcing a third Nightmare Whispers. The final volume of horror stories under that Heading. Here is the cover. I will Share the Author List next Thursday as we are awaiting a couple of email confirmations. So Thursday next week I will share the final lists for all three. 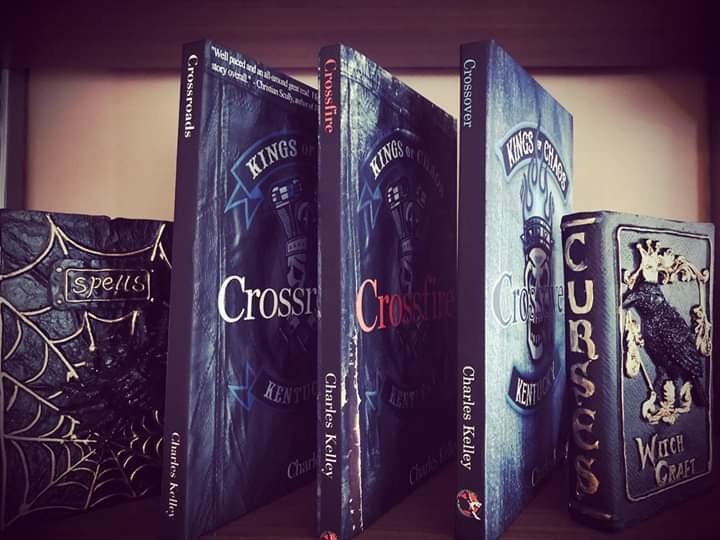 Today we introduce Charles Kelley and his Kings of Chaos Motorcycle Club Series.

We asked what genre he preferred to write and he said General fiction is probably the easiest classification, but action/adventure would likely be a more accurate category. Sounds like a fun read.

We looked into his web presence… His webpage and his facebook page. We found very professional looking pages.

We asked him about how his writing started. He told us…. My love of reading is what got me thinking about the idea of writing, but it was really when I discovered Patrick J. O’Brian that I got serious about giving it a shot. He’s a local author that I stumbled across when I was on a weekend trip to West Baden Springs, Indiana. I devoured several of his books and learned more about him, which stoked my thoughts of trying to write my own stories. Ideas have been flowing ever since. I started writing about nine years ago, and have been publishing for the past four of those nine.

When asked about writer’s block, he said “I’ve had a couple minor run-ins with writer’s block, but so far, it’s always been manageable (knock on wood). When it comes to writer’s block with my short stories, I just move on to another story to get myself unstuck. Usually shifting my focus to new characters and a different plot is plenty to get my creative juices flowing again. If it hits when I’m working on a novel, then I try to skip ahead to the next plot point and start from there. When I get back into a good groove, then I go back and bridge the gap.”

So far he has written a cookbook, a children’s book, three novels, countless short stories, and even a few poems. When asked about this variety he said it just depends what kind of mood he is in when inspiration strikes.

When asked why he is an indie publisher, he said “I was unfamiliar with the publishing process, and the more I learned, the more overwhelming it became. Self-publishing seemed to be the path of least resistance, and gave me a great opportunity to learn about the publishing process first hand. I’ve self-published my entire series of novels so far to help get established, then I may consider a more traditional route for my next projects.” We are going to definitely be watching him to see what comes.

Charles lives in Indianapolis, Indiana with a Boston Terrier named Sonny, and his wife and two young boys that have more energy than I can keep up with.

According to his wife and sanity, he has too many hobbies! He enjoys riding his motorcycle, working out, playing guitar, reading & writing (of course), watching TV and movies, traveling, and anything else that’s shiny and grabs his attention. Sounds like a good many of us.

Charles Kelley grew up in the foothills of southern Indiana. He fled the farm lands upon graduation from high school to attend Ball State University. After receiving a B.S. in Criminal Justice/Criminology, he started his career working with various criminal justice agencies. His writing career started modestly with a personal blog, which developed his love of creative writing, leading to his web page of short stories. From there, he has been involved in several writing projects with other authors such as Adam K. Moore, Christian Scully, Andrew Miller, and Jonathan Degler. Charles has been developing several of his own ideas, starting with his Kings of Chaos Motorcycle Club series. He currently resides in Indianapolis, Indiana and is trying his best to raise a family, further his career, and develop his writing skills. Follow him on Facebook (www.facebook.com/ckwriting) and Instagram (@ckfiction) for more updates!